Blessing Leonard: Visualization in the Cloud

I was born and raised in Lagos, Nigeria. After getting my Associate’s degree in Cybersecurity, I transferred to the University of Baltimore in Maryland where I major in Applied Information Technology with a focus on security. At the end of this experience, I hope to gain some insight on the relationship between cloud architecture and data accessibility.

This research focused on the effect of visualization on two Linux machines, each equipped with different Nvidia GPUs. The study used: two of Nvidia‘s GPUs (the K5000 and K2200), ParaView 5.3.0 for the visualization processes, and the nvidia monitoring tool in Linux command line for recording the amount of resources being used.

We received a general briefing on what the research program entails during orientation on Monday, after which we met with our mentors. At the initial meeting with Dr. Wang, we established that the experience will be a combination of a theoretical and practical approach, went over existing technologies, the issues that gave rise to the research project, and the ideal output of the research experience. We also identified tasks to be completed at the end of the week which included me: drafting a research proposal, researching Nvidia’s role in cloud visualization with a focus on the available GPUs, and setting up my hands-on working environment which includes CaptureSDK and ParaView. The week ended with me having a basic understanding of visualization and how cloud visualization can be beneficial.

Over the weekend, my roommates (Becca and Bayley) and I explored the botanical garden where I discovered my new favorite plant name: “formal attire”. We fell in love with the turtles, and made an amazing discovery on campus: a snack vending machine! With all these discoveries, I began the week slightly more confident in my understanding of the subject matter, however, with this week came the challenges of research. For the hands-on aspect of the project, I focused on finding software that can be used in measuring the impact running resource-intensive applications such as ParaView has on the GPU; unfortunately, that proved to be more tedious than expected. Instead of finding software for application-specific benchmarking, I kept finding ones that were preconfigured with some graphics and that measured the overall capacity of the GPU. The other obstacle encountered was finding datasets to be used in the benchmarking process that were acceptable in ParaView. The week ended with me trying to find papers on GPU streaming benchmarks for both clients and servers.

Week 3 started on a high note, I found some datasets from the RCSB Protein Data Bank whose format was assessible by ParaView. Also, as against finding an application for benchmarking, Dr. Wole and I discovered some commands that could be used in the Linux CLI for logging resource usage. Thanks to these accomplishments I was able to do some test runs and get a good picture of the initial output, and what my final output should be. I am currently in the process of setting up the streaming component required for the project. The streaming setup will be in a client-server fashion with two implementations:  the first will be a client-server relationship between two Linux machines in the visualization lab, while the second will be between a Linux machine and the Palmetto Cluster (Clemson’s proprietary high-performance computing resource made up of 2021 computer nodes and 23072 CPU cores). Hopefully, the streaming component will be established and fully functional before the midterm rehearsal next Friday; once this is taken care of, I can fully dive into the benchmarking phase.

More tests were conducted and the data on GPU memory usage were collected for both Linux machines. However, some changes were made to the environment setup: instead of streaming between two Linux machines, ParaView was run on each of them independently. I am working with the following setup: 1 Linux machine with an Nvidia K2200 GPU and the other with an Nvidia k5000 GPU. Due to some complications with the software upgrade on Palmetto cluster, I have been unable to setup the cloud architecture required for the cloud streaming portion of the research. So far, I Have collected data on both Linux machines using different data set sizes the lowest being 11.9MB and the largest 7.5GB. I have also been able to extract the data from the command line output into Excel spreadsheets; the next step is to visualize the data and any detected relationships in Tableau.

There’s not much to report for this week as the July 4th holiday made it a little more relaxed than the previous weeks. Still working on the data extracted into Excel—noticed some information was missing for some of the datasets so parts of Wednesday and Thursday were spent finding and filling in the missing cells. Preliminary steps towards visualizing the data collected in Tableau have been taken but conclusions are yet to be drawn. Progress was also made on the Palmetto Cluster, we were able to load the 11.9MB dataset successfully. Although still a little finicky, there’s hope for advancement soon. 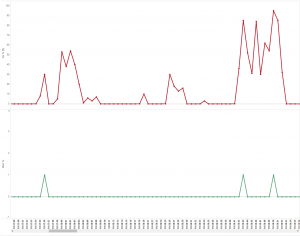 A Snippet from One of the Tests. Top: Streaming Multiprocessors use in % (sm%). Bottom: GPU Memory Use in %(mem%).

Armed with the initial depictions of memory usage from completed tests in Tableau, the search for trends in resource use began. I also worked on updating my research paper draft and I’m currently working with Ruben on merging the data from a test that was run on both machines to compare the readings and draw conclusions. Given Palmetto cluster’s restrictions, we decided to use the IBM Power8 server (a smaller cluster run by Dr. Wang’s graduate crew) to implement cloud rendering so tests can continue to be run. However, this move also came with its challenges as we almost immediately discovered some compatibility issues with OpenGL and Power8, and finding documentation about the two technologies has proven almost futile thus far. Upon feedback from an IBM representative, it was confirmed that the current driver does not support rendering and OpenGL although a new driver with the needed features is expected to be released at the end of the month (July 2017). This however, will be too late as the REU program is expected to wrap up at the end of the month so the most logical move given the circumstances would be to move back to Palmetto.

This week involved running more detailed tests for credibility purposes. To achieve this, the measurements were taken in two forms: one was at the application of each filter and the other was of a continued test with no interruptions. Both were compared to find patterns that could provide explanations for the varied measurements and duration of the tests on each GPU. I was also able to complete working drafts for my final report and presentation.

Made final changes to both my paper and presentation slides, as well as started and completed my poster. Had a run-through with Dr. Wang on Wednesday morning and the presentation rehearsal in the afternoon. Spent part of Wednesday and Thursday adding the feedbacks from both run-throughs into the paper and slides. Friday is all about the final presentation and poster sessions.

Based on the results from the study, it can be inferred that a GPU’s memory and core capabilities should not be solely relied on for determining its ability to implement visualization of large data sets. Future work include improving the real-time collaboration on, and the availability of streamed media (which are usually resource intensive) stored in the cloud on mobile devices and eventually virtual reality gears.

Wondering if you are smart enough to do this? Well, you never know until you try. The cool thing is no one expects you to know everything about your project, just be open-minded and willing to learn; plus Dr. Wole is always there if you need him. Also, if you are stressing about the lab culture and dress code like I was, it’s chill: pack what you would for college but bring a couple dressy outfits for the midterm and final presentation. Good Luck!